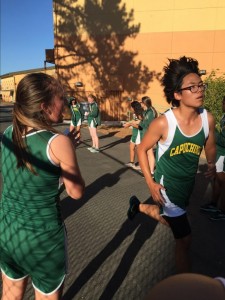 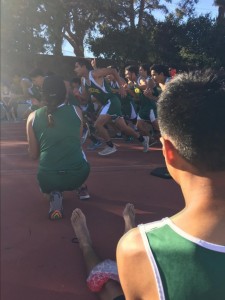 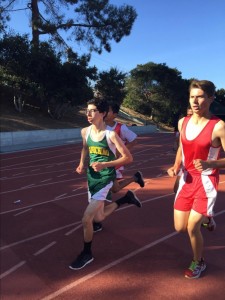 Coach Mike Trimble replied when asked what it meant to have a Cross Country meet at home. Cap Cross Country usually has one scrimmage meet a year on the Mustangs’ home turf- the past two years against Mills, and this year against Pacifica’s Oceana High School last Wednesday, October 5th.

“I just think it’s a special event because not a lot of schools get to have meets like this at home, so it means everything. I really like it- the kids made it good, the volunteers made it good, and the kids raced hard.” Coach Trimble went on to say about the meet. “Volunteers” include Capuchino’s one and only Mustang, whose appearance at the Oceana Meet was the first time at a non-Basketball or Football game in years.

Runners of Cap’s Cross Country Course run approximately a 2.5 mile course that doubles as a tour around campus, from the stadium, to the various fields, up the infamous Mustang Mountain, through the main parking lot, and back to the stadium again for a photo finish and high five with the Mustang.

When asked how team members felt about the 2.5 miles, Sophomore Aidan Lai, who later went on to come in first for Cap’s Boys Open team, replied that “It’s more fun to have a meet [at home] because you know the course, and you get to run with your team.”

The team’s Seniors also harbored some sentimental feelings toward the race, this being their first home meet of the season and last home meet ever as Capuchino Mustangs. Senior Declan Sanchez called the race an “awesome experience” and when asked how he felt at the finish line, said that he felt, “a sense of relief, and also this sense of accomplishment that I just finished this whole race and I put in my all, and now it’s over, and I’m proud of what I did, and it’s a great feeling.”

Senior Jenn Celona admitted that the reality of her last home meet, “is a bittersweet moment” but that she’s glad to have enjoyed it with her teammates, because it’s a moment she’s been waiting for throughout her four long years on the team.

Pulling out first places in 2 out of the 3 races (Varsity Boys and the All-Girl Races), and proving to be contenders in the 3rd JV Boys Race, last Wednesday’s meet was a solid start to the Mustangs’ race season, with four more meets to go (the last being PAL Championships at Crystal Springs on November 5th). The team hopes to be a Central Coast Section contender in both Boys and Girls Varsity this year, following last year’s Boys Varsity CCS qualification.

Looking forward to the rest of the races to be run, Coach John Ellcessor commented on the team’s largely successful day at home and the meets to come, stating “We’ve got a long way to go still, but I think we’re coming together…The racing season has begun; it’s time to get it on.”

IMAGE 1: Sophomore Josh Hafter gets an early lead on an Oceana runner in the second track lap of the meet.

IMAGE 3: Senior Jenn Celona cheers on Junior Myles Fang as he rounds the stadium for some of the last meters of the race.