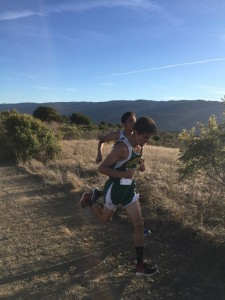 “Who wants it more?” Sophomore Josh Hafter screams at his fellow Mustangs as they sprint the last fifty meters at Crystal Springs Cross Country Course. He knows how they feel- close to death, like they’re incapable of one more step. But somehow, they’re able to sprint to the finish line empowered by cheering from their teammates like Josh. Some Mustangs even attain Personal Records, like Senior Michael Morgan-Ellcessor.

Crystal Springs is about a three mile long course overlooking Interstate 280 and the CrystalSprings Reservoir. It’s often dreaded by Cross Country Teams all around for its dusty trails and infamous Heartbreak Hill at the 2-mile mark of the race. Often referred to as “the Promise Land” by Coach Mike Trimble, the course will be raced 2 more times by our own Capuchino Mustangs. It’ll also serve as the site for this year’s Central Coast Section Championship, which the Mustangs are hoping to qualify for.

With 2 more races to go, the Mustangs will have raced “the Promise Land” a total of four times this season. Their goal? Beat their previous time every race. Senior Michael Morgan-Ellcessor achieved his best time ever at this past Wednesday’s meet- a 16:42. Smiling of accomplishment, Morgan Ellcessor caught his breath after he lept across the infamous Crystal Springs uphill finish line. He had gone well beyond his goal for this season (to beat 17:00). When asked how he felt, he replied in between breaths, “It was amazing. I felt really consistent… I’ve been trying to get under 17:00 for like, a year now, so this is a big deal for me. It’s a good feeling,”

Morgan-Ellcessor’s Personal Record is not only a success for himself, but the entire Mens Varsity team. The lower their times are, the higher their place.is. On November 5th, the Mustangs will compete in PAL Championships, and only the top nine Mens Varsity teams will earn a spot on the dry, dusty starting line at CCS. Morgan-Ellcessor’s time along with the successes of his teammates puts them on the right track for lacing up at CCS.

CCS, however, is still a couple meets away for the Mustangs. That’s six more miles, two more sprints to the finish line, and two more times to drink from the blessed water fountain at Crystal Springs. With the finish line in sight, our Cross Country runners pick up their speed and focus in on the only acceptable outcome: success. When asked, “Who wants it more?” even Josh Hafter knows their thoughts.

“They want it more.”

Watch the Mustangs compete in PAL #3 this Thursday at Crystal Springs.